I believe that mere belief without evidence has been unjustly elevated to the gold-standard of ones knowledge and character.

I see intense belief in anything is a seedbed of tribalism—

I know when belief is required to be part of group, the group will betray you over unbelief.

I’ve observed and experienced the key to understanding the mysteries™️ is unbelief.

I understand the universe is a diverse array of energies and dimensions where some people are attuned more so than others to it.

I believe the foibles of human neurology, perception, and bias need to be understood at a grade school level to promote tolerance of difference and friendship—all of us!

I notice that religious beliefs need to be protected by law because they cannot stand on their own merits.

I believe the ability to hand-wave contradiction and fallacy hardwires neurons through repetition and submission. The problem is now in the physiology.

I believe faith should never be the end-goal of intellectual achievement.

I found that submitting your will to belief in god/allah, or any other godform disempowers the best part of human nature, delays intellectual advancement and personal achievement.

I would wager belief should never be intended as a solution and should be the least respected of all professions. 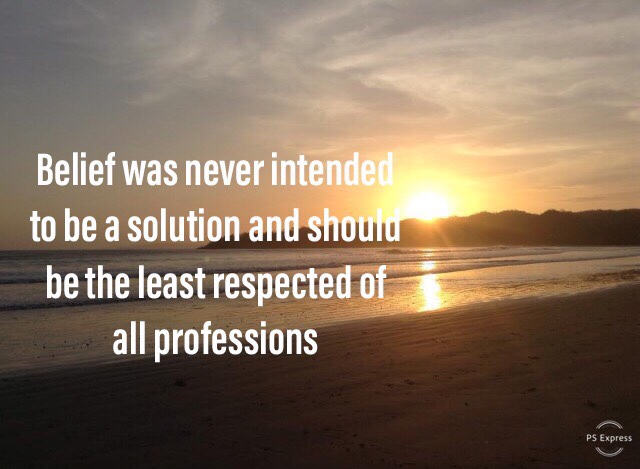 I believe that mans impatience has allowed him to be conned by men of self importance. Now the prisoners drive the ship.

I think that humanity is much older than we realize, that man has appeared on the scene several times in multiple generations of geologic time—things are much stranger in the past than we realize. We are much more capable than we realize too.

I believe that any belief should be able to provide some empirical data, and transition from belief to pure knowledge in a reasonable amount of time.

I’ve observed that big box religion and one-size-fits-all dogmas are inadequate to provide the needs of nearly 8billion differing physiologies—evidenced by each member choosing for himself the parts of morality and teaching (s)he already knows.

I believe people’s beliefs are merely hunches, feelings, intuitions—guesses, if you will, they’ll divide their families and friends over. I also believe that is immoral.

I believe coffee was the second greatest product of plant evolution.