Raising an empty glass to the discovery of religious evidence

The real miracle about evidence is the believers ability to dismiss what doesn’t agree with faith. That same faith that is simply an emotional attachment to an idea that, A: was forced upon them, or B: just feels right, or C: There are so many believers they can’t all be wrong, can they? There are more in there, I’m certain.

This New Year’s Eve, let’s drink to belief, anchoring bias, cognitive dissonance, and to evidence. Not just any evidence, mind you, but real evidence like chariot wheels in the Red Sea, the Shroud of Turin, the Golden Plates™️, Salamander Letters, The Cardiff Giant, Indian Guru Sai Baba’s Legerdemain, the discovery of Noah’s Ark, and the Ossuary of James, brother of Jesus.

All the above are faith promoting because of their fraudulent hoax. The religious love to downplay empirical evidence (until they think they have some) then will embrace pure junk as proof for god. Unwinding such toys is such a nuisance, so they then let them play out on their own.

With 100% certainty they EMBRACE empiricism and are its greatest champion, if they could actually present evidence that supports their beliefs. They then scream, look at the evidence!—JZ. They love evidence, but it first must support their belief. They love it so much they will clamor from sea to shining sea to get a glimpse of even the most outlandish display of quackery.

But who wants to prove themselves wrong in religion? Who will truly look beyond what they want to believe, or what they’ve been saddled with since childhood?

A toast 🥃 to the Apparitional Toast this New Years Eve, and all the best to us all for 2020—maybe a year to see clearly. 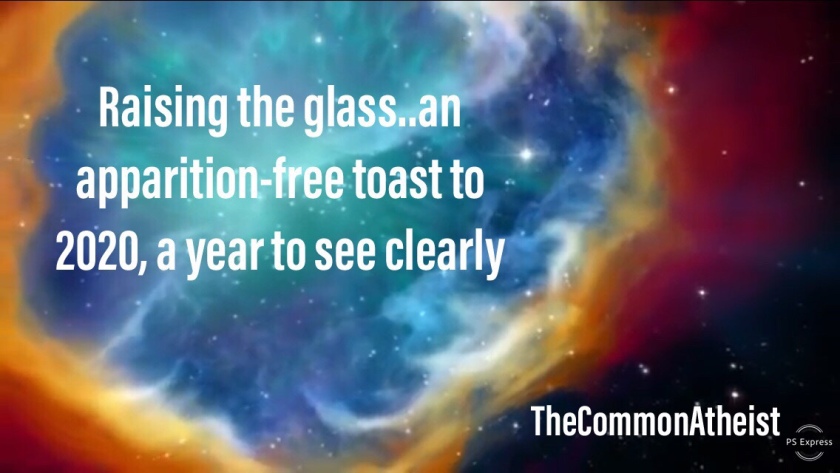 41 thoughts on “Reasons To Celebrate”