Can atheism control the flow of hormones through understanding physiology?

Finely tuned sermons and political speeches are designed to produce emotion. Next time you feel the spirit of god or nationalism, please take a moment to thank the almighty for the substantianigra and the ventraltegmental area of your brain—this is where production of a neurohormone is released by the hypothalamus—The Almighty© Dopamine

Also thank god for serotonin and endorphins. These are two of the LORDs best kept secrets, bringing people into the fold by mere micrograms of inspiration. “Phenylethamine is the hormone that results in the feelings we get in the early stages of a relationship. Cocoa beans contain Phenylethamine too— Getting a release of this hormone with just the right manipulative timing can cement your relationship with Jesus—god-is-that-good”!

The pharmacological relationship between phenethylamine and amphetamine suggest that phenethylamine plays a prominent role in mediating mood-enhancing euphoric effects.

Initially discovered in 1935, it became widely known in 1953 in US research. We’d known about it but was studied as enteramine. Whatever you call it, it’s the good stuff that can be released by mood enhanced sermons, falling in love, or moments of emotional and physical rescue. Combine these babies with adrenaline, norepinephrine, and cortisol in a crisis and you can literally see the image of god come to the rescue, etched in your memory forever based on your precondition response. “When people experience a traumatic event, the body releases two major stress hormones: norepinephrine and cortisol. Norepinephrine boosts heart rate and controls the fight-or-flight response, commonly rising when individuals feel threatened or experience highly emotional reactions. It is chemically similar to the hormone epinephrine — better known as adrenaline. In the brain, norepinephrine in turn functions as a powerful neurotransmitter or chemical messenger that enhances memory.”(1)

Here we see that god has done nothing that evolution didn’t do first. While in days-of-old these feelings were credited to god, we know now that spiritual experience is nothing more than the release of hormones—where timing is everything. An upbeat crowd, a calculating sermon, or a life altering event and…Voilet! HERE is a fantastic 5 minute video explaining more. If you want to activate all the receptors in your brain at once? LSD BABY! “Right now we know for sure that LSD has activity at the Dopamine, adrenergic, and serotonin receptors 2A, 2C, 5C, and 6. (2) 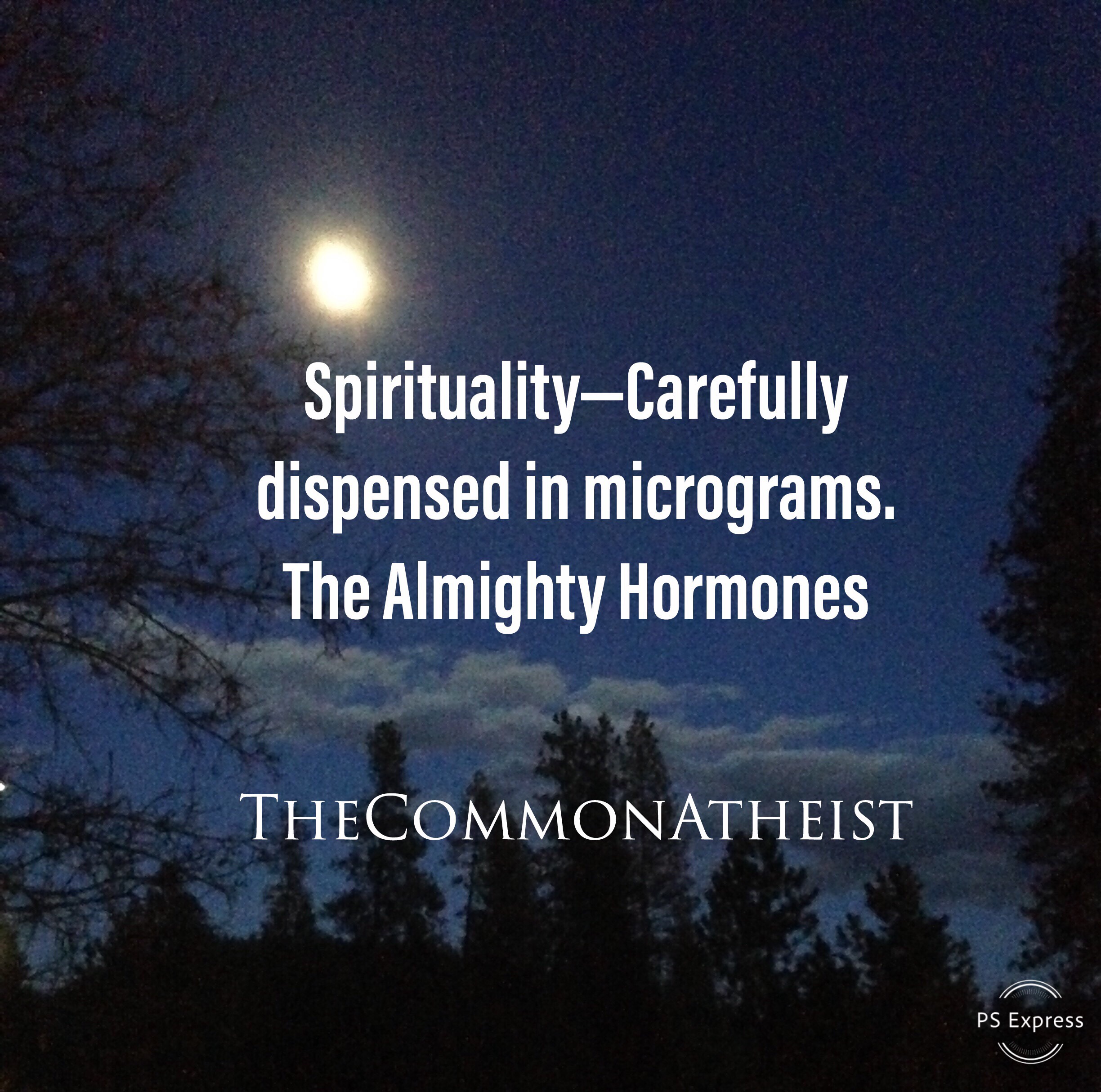 Religion—a way of transforming the neurological, evolutionary response into an unsolvable mystery. God shall not be mocked, but he can be manipulated through nature’s pharma.

27 thoughts on “Holy Spirit or Hormones?”

This is a text widget. The Text Widget allows you to add text or HTML to your sidebar. You can use a text widget to display text, links, images, HTML, or a combination of these. Edit them in the Widget section of the Customizer.
Follow TheCommonAtheist on WordPress.com
Loading Comments...
Comment
×
<span>%d</span> bloggers like this: