As natural as atheism. The clarity of unbelief

Atheism is not a belief, but its side-effects are an art form of independent thought, skillfully navigating through life with immunity from all religious dogmas. The art of atheism rejects religion based on its outcomes and insufficient evidence. It rejects the Jehovah Affect© and the self important aggrandizement of its zealotic “explainers”. It is simply self empowerment over our own mental and physical intuitions and abandoning the tried and failed—which was not bought in wisdom, but in opportunistic haste.

We have been stationary cycling with these ideologies long enough. And while world is ready to embrace inevitable change rather than more of the same “ancient wisdom”, monotheism digs in its heels to maintain parental control.

I am not Atheism, but Atheist. I chart my own path with purposeful impunity. Atheism is simply a million ways of clarity from the delusions of religious beliefs in gods—

How long shall we accept faith and it’s limitations by obedience to archaic laws from a violent time? Transcending belief mode is our greatest hope.

A true religion would be a rite of passage, not a permanent need.

Atheism rejects what belief has done to human anatomy, physiology, cognition, and the regressive nature of living in the past. No longer by faith am I a dis-intuitive, calcified victim of self deprecation told what “we” believe, and I refuse to accept the physiological changes that occurred through compliance to this belief, as permanent.

As we rekindle these lost arts connecting intuitions with existence, it has to be without any help from them. How long shall we chase this dead-end without a single solitary fact? Just believe…believe the hardwiring of faith and repetition can be severed.

How a ridiculous hoax can change history.

During 1917 Marcel Duchamp entered an upside-down toilet signed, R. Mutt, into an art exhibit. The Society of Independent Artists’ salon in New York—which claimed that they would accept any work of art, so long as the artist paid the application fee. The toilet was initially rejected as a hoax, but then admired, lauded as “groundbreaking”, when the true identity of the artist was discovered. Duchamp’s Sokal style hoax had worked. “Whether Mr Mutt with his own hands made the fountain or not has no importance. He CHOSE it. He took an ordinary article of life, placed it so that its useful significance disappeared under the new title and point of view—created a new thought for that object.” Others who had followed Duchamp’s work closely, recognized the groundbreaking power of the work.

Other comments and editorials—

“It also doesn’t mean that we can’t revel in the Unsolved Mystery-like scenario of Fountain’s mysterious disappearance: To this day, no one knows what became of the “original.” We only have 17 copies that Duchamp created in the 1960s“.

“The nebulous origins of the fountain only add to its many layers and complexities”.

“If the genesis and meaning of fountain remain elusive, it has provided countless artists with something of a starting pistol for the idea of art-as-concept in the 20th century, underscoring the fact that the definition of art itself is up for grabs“. 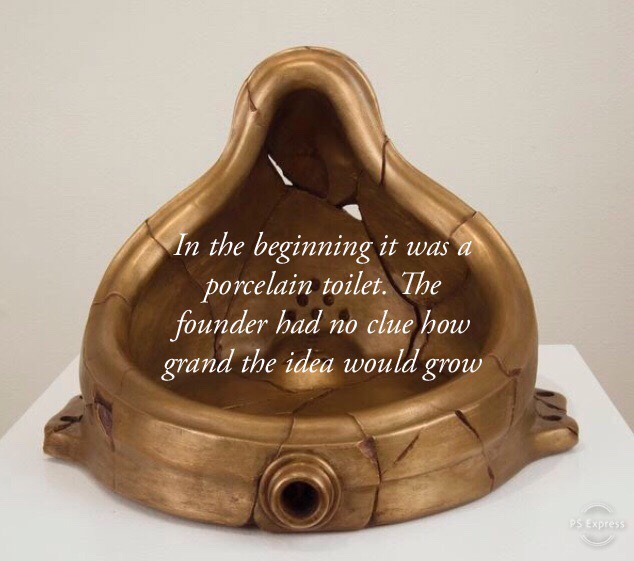 Though Cubists began breaking toilets, reassembling, bronzing, and selling them in the style of Picasso, the fact is, because of the Artists name, a new religion of crap/art gained a foothold in monetary value and influence. My guess is the original was put back into use and is once again a toilet. Here’s hoping religion too, finds a useful purpose—a history lesson

And the genius of Sir John Harington, and Thomas Crapper leads to art—in the style of religion.