Today is the 2,900th anniversary of the alter massacres. In honor of all the priests of Baal, we remember the victims of this blatant act of terrorism. 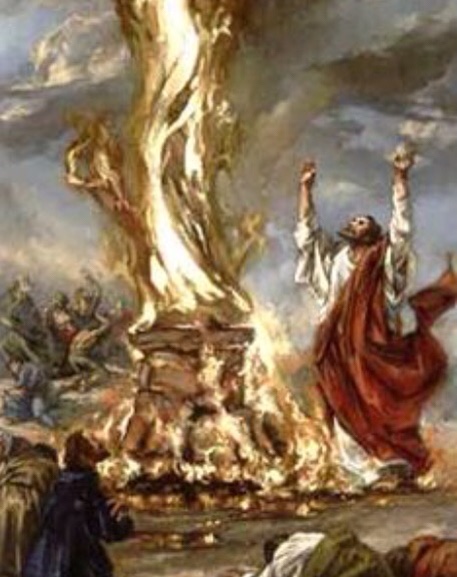 Here’s a quick summary of Elijah and the 450 priest of Baal. Elijah summons them all to gather around the alter for a little friendly God competition. If you all win, we worship Baal, if I win, we worship the LORD. Each team puts a bullock on the alter. First, the priests of Baal try to call down fire from heaven to burn their offering and nothing happens. Then Elijah digs trenches around his alter, soaks all the wood with sixteen barrels of “water“, And the water ran round about the altar; and he filled the trench also with water.”1 Kings‬ ‭18:35‬ ‭

Then the fire of (the Lord) fell, and consumed the burnt sacrifice, and the wood, and the stones, and the dust, and licked up the water that was in the trench.”1 Kings‬ ‭18:35, 38‬ ‭KJV‬‬ -parenthesis added.

This explosion sounds more like a total set up of a terrorist plot using militarized chemicals of the day, and could have easily been performed. 9th century BCE, had plenty of war developed technology with the use of oils, lime and sulfur and others were known in the region to light water on fire .

My guess is water in the pit with some “special” religious seasonings added to it, then a flaming arrow from afar, But no matter, the victors write the history, and after the alter was consumed they rounded up the 450 priests and murdered them (leave no witnesses) And Elijah said unto them, Take the prophets of Baal; let not one of them escape. And they took them: and Elijah brought them down to the brook Kishon, and slew them there.” More deceit and double speak, as they all bowed down to worship THE LORD, they were rounded up and slaughtered (1Kings 18:39) So much for peace treaties. Sounds like a reenactment of a Native American surrender or from a scene in Outlaw Josie Wales, or a chapter out of Columbus’ treatment of the Caribs in the 15th century. The Bible account is a historic template for abrahamic foreign and domestic terrorist policy. 1 Kings‬ ‭18 KJV‬‬

This is a text widget. The Text Widget allows you to add text or HTML to your sidebar. You can use a text widget to display text, links, images, HTML, or a combination of these. Edit them in the Widget section of the Customizer.
Join 1,385 other followers
Follow TheCommonAtheist on WordPress.com
Loading Comments...