The argument for an inconceivable and unimaginable, all powerful god. One that is without parts of physical matter as we could even comprehend. Consider a character so foreign to our nature, that his eternal compositions could not be seen, felt, or tasted, for our matter is not compatible nor can mix with his attributes (No wonder the psalms are so many) in any way.

All god can do at this point is watch, for historically when he has interfered or tinkered with the deeds of men (parting seas, global floods, Israelite armies laying waste to entire regions) are a horrible affect of mixing his perfect nature with this synthetic world. His attributes and ours—immiscible. Simply looking at the LORD, his foreign composition is too different, too toxic to be presenced by human neurons, optic nerves, or flesh—or are we too toxic to his, in this artificial scape, to mingle outside our petri-dish? A mite of dust cast to the outer reaches of creation as isolated, contained contaminants whose only purpose of matter holds the little interest of an out-of-state trash-dump, where when only goes to visit creates more carnage? 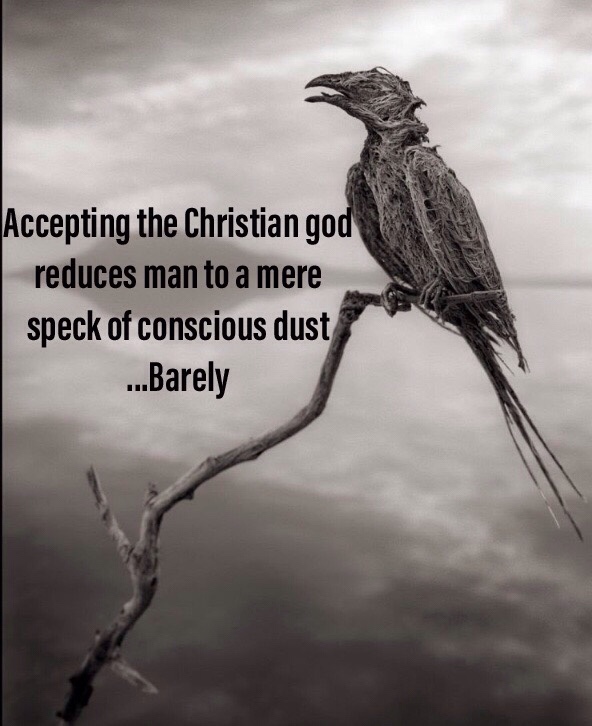 By merely dipping his finger into the stratosphere of our world—cutting stone tablets and etching stone walls. Presenting his hand—regional, if not global catastrophe, churning the elements, like adding ammonium perchlorate to a mixing bowl of “earthly” matter of which we are so crudely formed. That god, by pressing his arm into the ionosphere, simply splits atoms starting chain reactions of global upheaval. Are we but a plant that withers upon touching it? How long will he withhold his finger…his hand? His holy arm? What if he were to present his whole self? The world would melt as a sea of molten glass, where any man-thing that peeks at his composition withers and consumes itself. To this god, the total power in the world is but a firework sparkler, hardly a threat to ourselves, let alone an immortal. Splitting atoms is as natural for him as spearing your flattened, pointed hand into a bucket of air, or water. We are nothing but .02% solid waste, not even worthy of his attention—but to open the lid carefully contaminates our meager world with carefully placed attributes of cataclysm, tectonic shifts, and drought, while we maintain our only sense of order in the heavens by his leaving us alone for a blink of an eye.

“And the Lord said unto Moses, Go down, charge the people, lest they break through unto the Lord to gaze, and many of them perish.” Exodus‬ ‭19:21‬ ‭KJV‬‬

“In the same hour came forth fingers of a man’s hand, and wrote over against the candlestick upon the plaster of the wall of the king’s palace: and the king saw the part of the hand that wrote.” Daniel‬ ‭5:5‬ ‭KJV‬‬

Setting aside your contradictions for the moment to complete this thesis, for what will it matter in a moment or two what we achieve, or what we do when the world will soon be rolled together like a scroll? This man-create has been an interesting exercise, and man has proven quite genius with his teaspoon of dirt and a dash of consciousness. While we have been watched long enough and the experiment nearly over, GOD is ready to roll up his experiment and head off to yonder galaxies to admire his handiwork. It doesn’t matter—our world of refuse unfit will be dispersed when the meeting of the gods conclude, and victoriously he’s showed he can create something living out of a thimble full of hardly anything, as long as it is left alone long enough to generate order. It doesn’t matter that however dismal our minds and actions may seem to him, that our collective consciousness will sit on a shelf for forthcoming eons. It may not matter to him that our struggles and achievements have been fought and won with nothing but handicaps and soulful soil, but it matters to us, the lowliest of life-forms. So, a god of mercy? A god of compassion? A god of love? We shall see.