The pastor is repeatedly distancing Christianity from the teaching of jesus. His most recent open question is” what teachings of jesus has led to atrocities? While it is obvious that the system of Christianity has led to a love affair with torture and genocide, what specifically did Jesus say to incite such a continuation of wreckage throughout Christian history. I repeatedly tried to make it clear, that intensional or not, unrestrained Christian religion has led to force and violence. Whether this is by design or not is not the point. The point is that it has happened repeatedly through families, villages, towns and countries where the religious have had unfettered control over their peoples. If they knew this would happen, shame on them, if they didn’t, some all-knowing deity. Either way, they knew or they didn’t.

My first answer was to quote “go ye into the world and preach my gospel” and when refused “dust off your feet as a testimony against them” and leave that town. Mel downplayed and ignored the gesture, but Bible commentaries, written by bible scholars are nearly unanimous in the significance if this gesture. “The very dust of a heathen country was unclean, and it defiled by contact. It was regarded like a grave, or like the putrescence of death. If a spot of heathen dust had touched an offering, it must at once be burnt. More than that, if by mischance any heathen dust had been brought into Palestine, it did not and could not mingle with that of ‘the land,’ but remained to the end what it had been – unclean, defiled and defiling everything to which it adhered.” The apostles, therefore, were not only to leave the house or city which should refuse to receive them, “but it was to be considered and treated as if it were heathen, just as in the similar case mentioned in Matthew 18:17. All contact with such must be avoided, all trace of it shaken off”. (Edersheim, “Jewish Social Life in the Days of Christ”). The symbolic act indicated that the apostles and their Lord regarded them not only as unclean, but as entirely responsible for their uncleanness. If he was god, he should have known this was a horrible custom and condemned it as such.

Immediately the gospel of Jesus was set to divide. Missionaries spread through the near east and infiltrated towns to preach. If rejected, a basic “screw you all to hell” was established as an immediate divide among the people, setting one above another in piety, worth, correctness, and virtue. That is from the starting gate a teaching of Jesus Christ that spawned racism and hate. Regardless of the intent, there is the underlying reality independent of what is now believed about it. 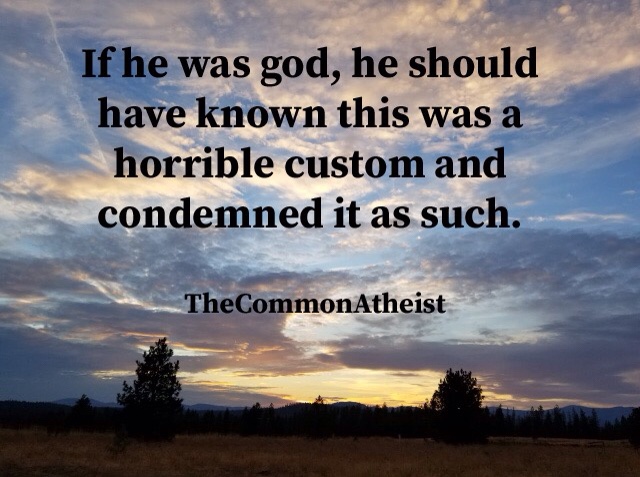 The Revelation of Jesus Christ, the final book of the New Testament as recorded by John on the Isle of Patmos, has other interesting teaching designed to fail humanity.

Men, acting as agents of red written scripture, assist jesus in fulfilling his prophetic utterance. Here are just two things that when written, must have shortly come to pass, and religious men like to help their god along as quickly as possible.

“The Revelation of Jesus Christ, which God gave unto him, to shew unto his servants things which must shortly come to pass; and he sent and signified it by his angel unto his servant John:

“I am he that liveth, and was dead; and, behold, I am alive for evermore, and have the keys of hell and of death.” Revelation‬ ‭1:18‬ (no doubt)

“And I will kill her children with death; and all the churches shall know that I am he which searcheth the reins and hearts: and I will give unto every one of you according to your works.” Revelation‬ ‭2:23‬ ‭

(Italics are mine) Here we go, early into the revelation of Jesus Christ, sanctioned by true believers to sit back and wonder—”how could the teachings of Jesus possibly cause any harm? In the spirit of brevity, I am not going to copy and paste dozens of scripture from the more friendly, new and improved gospel according to Christ, but one more will suffice.

“Behold, I come quickly: blessed is he that keepeth the sayings of the prophecy of this book.” Revelation‬ ‭22:7‬ ‭KJV‬‬

Finally, too much emphasis on sex. They’ve taken a natural instinct and turned it vile, while the emphasis on condemning “harlots” and controlling intercourse is a noble endeavor, men, in direct obedience became enforcers controlling natural behavior with stones and fire. God is love.

Ellen White, prophetess and co-founder of the Seventh Day Adventist church had a large stone thrown at her when she was nine. Knocked immediately unconscious, regained consciousness for a few minutes, then slipped into coma for three weeks. From descriptions and lasting deformity appears she had a La Fort, or basilar skull fracture and permanent frontal lobe brain damage.

Epilepsy is a term that had not been invented yet, but descriptions of her visions are like many seizures I have witnessed in the field. Eyes pegged upwards and trembling, falling, postictal phase, then waking up to gibberish prophesy an extension of her devoted Christian life. Modern medicine can calculate severity of injury based on duration of insult. Not so in early 19th century. HERE is an interesting read about her head injury and descriptions of her visions. After her death visions no longer blessed the church, nor with anyone since. (Since the next head injury) The rebuttal—God works in mysterious ways. Post traumatic epilepsy is a crucial link to revelation, as well as congenital epilepsy. 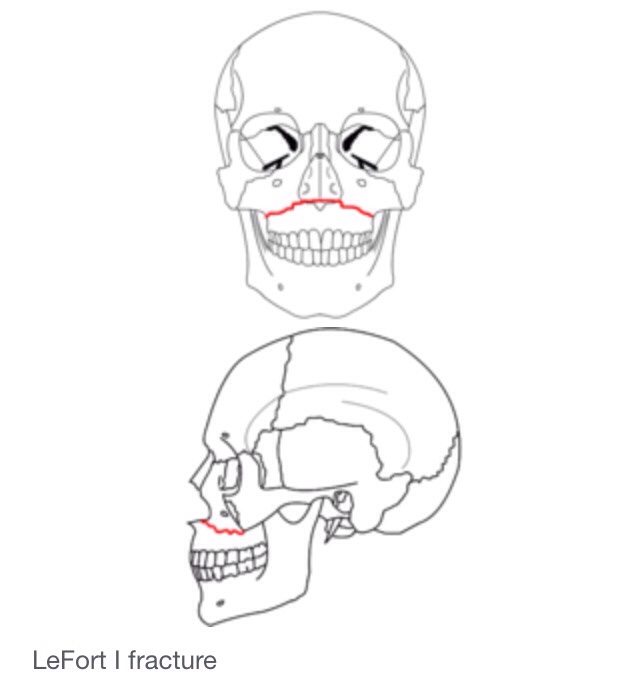 During waking hours our brains build up proteins and other waste. During sleep, brain cells shrink and cerebrospinal fluid (CSF) washes and rinses brain cells. The importance of sleep to maintain brain function is critical to life itself. Without sleep we die after a few days. Alzheimer’s and every other disease linked with dementia have one thing in common—sleep disorders.

During sleep our brains are flooded with CSF. Changes in brain cells size and debridement of unwanted toxins are flushed of beta-amyloids to maintain healthy function. During this time we are susceptible physically and mentally. Sleep is defined “a condition of body and mind such as that which typically recurs for several hours every night, in which the nervous system is relatively inactive, the eyes closed, the postural muscles relaxed, and consciousness practically suspended”

Microsleep is also fairly common, especially during monotonous times of work, driving, or periods of sleep deprivation. Dreams and revelations can be heard as well as audible voices and other sounds, right in the daytime without the knowledge of the subject having fallen asleep. I had an old packing buddy that would have these episodes frequently. It was amusing that he never recalled falling asleep.

One of the most popular LDS revelations came from Lorenzo Snow during a time of financial difficulty. The revelation on tithing came to the 85 year old leader after an exhausting trip to southern Utah in 1899. He went into trance at the pulpit while speaking, and that is the backbone of the Mormon tithing commitment. It all fits a microsleep scenario and dream.

Every day comes and goes and nearly a third of it is spent unconscious for the sole purpose of rejuvenation and cleaning. During this time of washing, or lack of cleansing due to irregular sleep patterns, we are physically and mentally susceptible. Flies can rest on your face and intruders can enter your home. During cerebral cleansing, unwanted waste is flooded over shrinking brain cells, stimulating all areas of the brain inducing dreams, nightmares, and visions. If you want to trust your dreams in this state and call it god, know that even people blind from birth often dream visually. Spectral Evidence (if you missed it) is the backbone of religion, and even people that have never seen, can see things that were never there. Trust that to revelation or a calling from a god? I think not. More like recalling a B horror movie in a nightmare. 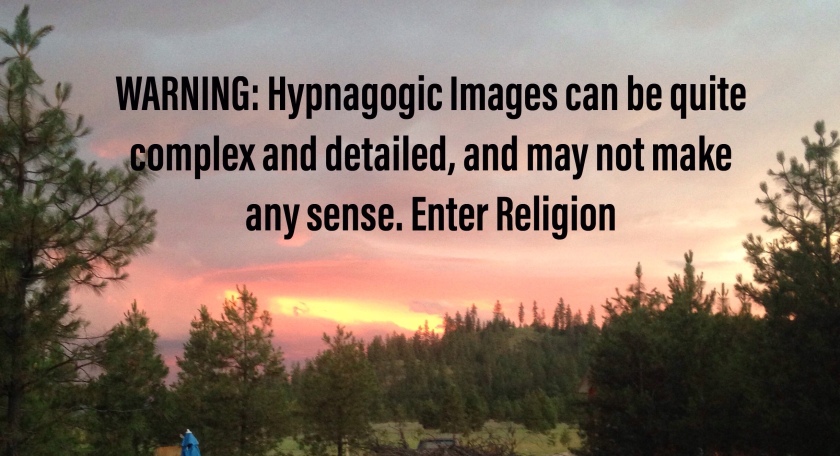 Transition in and out of sleep often produces a wide variety of sensory experiences from several to one modalities. Most frequent, as in the case of my spouse, is auditory sounds. People will frequently hear their name called out or hear a loud clashing sound or a mild whisper. Knocking and loud bangs are also fairly common.

In my case I typically see down a fleeting, extending corridor. The images are sometimes clear, sometimes darkened, and as I become aware of them they disappear. Usually this is in color, but occasionally black and white. Once in a while they are very vivid hallucinations I can recall shortly after wakening, but usually not.

Thought processes on the edge of sleep tend to differ radically from those of ordinary wakefulness. For example, something that you agreed with in a state of Hypnagogia (excellent read) may seem completely ridiculous to you in an awake state. On a different direction though, many (including myself here) are able to solve problems in this state. Edison, Tesla, and other inventors have reported ideas or problems they have solved in this condition. The brain is fascinating!

Also, research has shown that during the hypnagogic state subjects are very open to suggestion and EEG readings show elevated responsiveness to sound around the onset of sleep.

Hypnagogic state is also frequently re-created with the use of psychedelic pharmacology. Very similar findings across the spectrum between near sleep and drug induced experiences create these visionary experiences.

Hypnagogic phenomena may also be interpreted as visions, OBE’s, astral glides, prophecies, premonitions, apparitions, or enlightenment, depending on the experiencers’ beliefs and those of their culture.

There are some famous hypnogogians who “heard” the voice within themselves; Abraham, Noah, Muhammad, Moses, Paul, Joseph Smith and so on. Happy to be living at a time where we have valid explanation for hallucinatory experience that precludes sleep. If there is a god, he’s right between your ears. It is us. Top that off with a little peyote or LSD and you’ve got yourself a church.

WARNING: Images can be quite complex and detailed, and may not make any sense. Enter Religion