Nature is an excellent teacher to the obvious inadequacy of faith.

I read a book when I was a teenager called The Tracker, by Tom Brown. I still have a copy and my 7 year old daughter is a big fan of identifying tracks we find out on our hikes.

Anyway, I was living in the mountains working as a wrangler, guide, and packer for an outfit called High Country Packers and I read The Tracker. There’s a section about stalking deer, and if you’re patent and do it right, you can walk right up to them. So I gave it a try. There was a two point mule deer enjoying a salt-lick we had near camp to attract wildlife and I started after him. I guess it took an hour or so to walk up to him. He kept staring, dipping his head, and 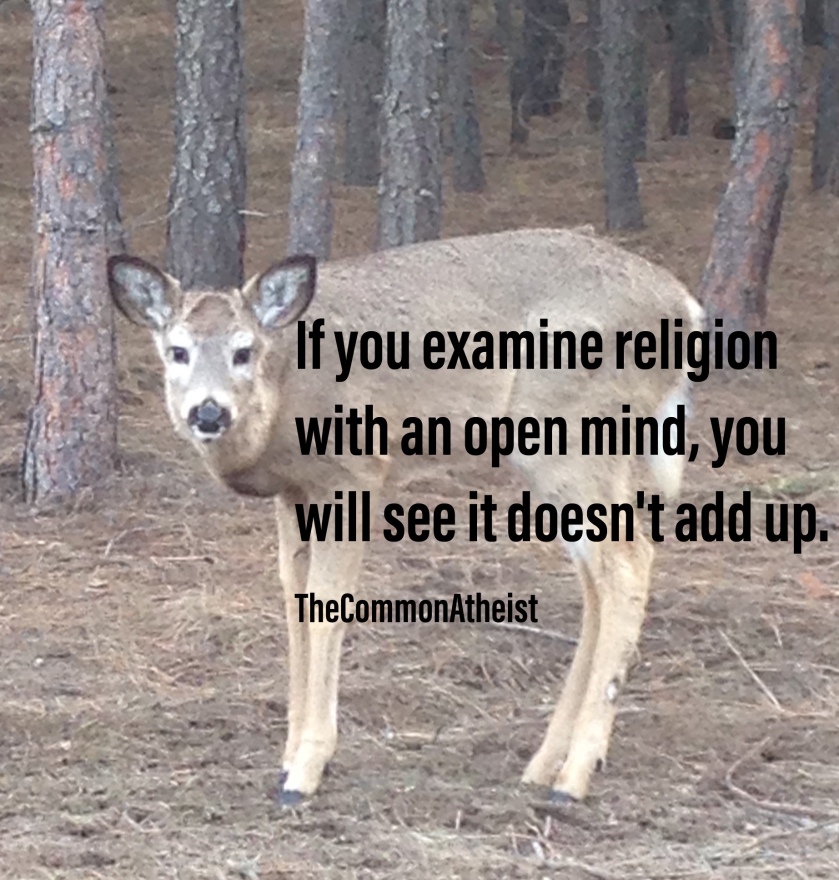 shifting his ears with a curious look on his face. Deer are reactive to movement, sound, and smell, so the trick is to be downwind, only moving when the deer isn’t looking—and be patient (and try not to laugh). I got to within ten feet and I gradually knelt down, took my little 110 out of my shirt pocket and took a whole roll of pictures. When I was done I moved a little hand wave and said “boo”. That deer bolted with an ass-over-tea-kettle stumble and off he went. Boom! I got back home when winter came and the film was missing. It’s a great story but I have no proof.

One difference between my story and religion; you can test the story for yourself and I am confident many if you could have similar results. Christianity has a story too, and if you test it you will see that it doesn’t add up in even one category or catch phrase.

I would like to find that film someday but no worries, I have honed the craft pretty well over the years. Unlike religion, it can be tested and demonstrated without excuse. Religions deferred method of responsibility is killing the planet. Nobody is coming to fix this, but unlike the deer, it won’t seem to go away with a hand wave and a boo. But like the deer, their colorblind to the obvious standing in front of them.

For those of you that live in the warm countries, a little video for you enjoyment after the new snow. (11 seconds)

For those of you still stuck in the snow, my apologies. This crew comes to visit every morning. I do like this part of living here!

Baby Panama bananas coming out of the pods and a cool butterfly 🇵🇦 These are both from my house on the Azuero.

I took these shots from five feet away with a banana in one hand. Normally very difficult getting a dark body against the sky. These were just above eye level. ﻿

It’s a great day to be alive!

Twenty feet out the back door. I love this place!