The results of Christianity isn’t one that can be measured. It is personal conviction that struggles to put into words what the owner himself thinks is crazy. But, once you believe your own “personal” story, it open up a serious can of worms. The obligatory nature of meta-reality (testimony) now has to give validity to all perceived paranormal activity. It makes it possible, but makes it even more crazy. See, you can’t understand my own personal experience with god, but you are expected to believe my own personal experience from god (unless that experience is Muslim or Hindu or other) there’s where Satan lurks—in other countries.

Second hand religion is a system of believing the quirks of human neurology are divinely inspired. Reality is not only the simple answer, but also more interesting. The galaxy of electrical neurons in our heads occasionally misfire, shut-down, cleanse, reboot, and reroute. It a wonder we have any stability at all, but we manage to limp along with the occasional tic (some more than others). The grand-mal seizure, the head injury, the near death experience, the trauma, the crisis, divorce, loss of a loved one, etc, all put pressure on the neurons, which is gods way of introducing jesus to unbelievers. No, it’s not, but having open dialog about our quirkiness without invoking the supernatural could be an exercise in tremendous growth to answer the questions how and why. 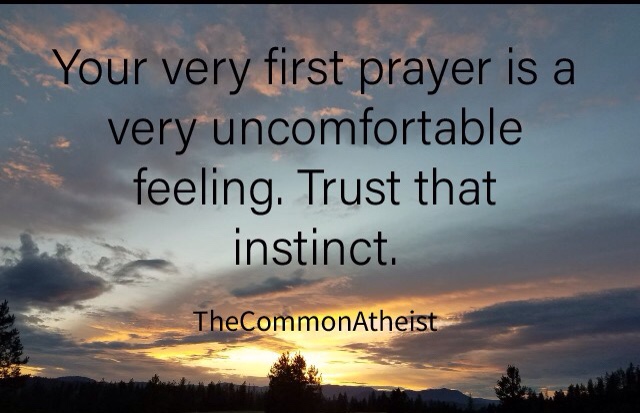 The second, second-hand way to god is through lying. Carefully wording your story to inspire conviction in others causes another backfire in the confusion of our own neuroniverse. Why haven’t I had a visitation? Does god not love me? Am I not chosen? Am I doing something wrong? Am I a sinner? “I am not even worthy to latchet his shoes”. So, eventually through some type of herd instinct peer pressure we wind up praying for what we want. The neurological implications of praying for what you want to believe (in order to fit in) is a near guarantee you will get what you want. Prayer, deep consolation, meditation, group prayer (ugh, everybody hold hands) is at first a very uncomfortable and stupid feeling. Trust that instinct. But as you see around you, the smiles, the hugs, the tears, the joy of the dervish, compels you to want more, even though it’s a sickening display of self inadequacy and recurring shipwreck.

The third second hand is the tic, tic, tic, of your life passing you by living a system created by someone else, fine tuned by someone else, for someone else. As every institution grows it becomes more flawed, more corrupt. As it breaks down it naturally gets more outlandish as they try to hang on. Religion is way over due for an undo, but are we ready to be our own?